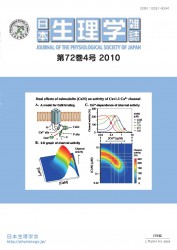 Calmodulin (CaM) is thought to mediate the Ca2+-dependent facilitation (CDF) and inactivation (CDI) of Cav1.2 L-type Ca2+channel. However, a precise molecular mechanism is still unclear. In this study, we proposed a model for CaM- and Ca2+-mediated regulations of the channel (A), based on the experiments in the inside-out patches of isolated myocytes.
CaM (0.1-15 μM)+ATP (2.4-3 mM) induced channel activity with a bell-shaped concentrationactivity relationship at 10-2,000 μM [Ca2+]. The bell-shaped curve shifted to the left when [Ca2+] was increased, implying a possible molecular mechanism for CDF and CDI. A threedimensional representation of channel activity plotted against [CaM] and [Ca2+] revealed a complex feature of channel activity (B). The curves for channel activity as a function of [Ca2+] with fixed [CaM] (upper panel of C) are derived from the contour map of channel activity (lower panel of C), and reveal an initial increase and then a decrease of channel activity by increasing [Ca2+] (as exemplified by red circles). These results are consistent with the hypothesis that the Cav 1.2 channel has two CaM-binding sites (for facilitation and inactivation) and one additional Ca2+-sensing site within the channel.
氏名の「郝麗英」は,「はお(赤+阝,第3 水準1―92―70)りいん」と読みます.