The voltage-gated H+ channel functions as a dimer, a configuration that is different from standard tetrameric voltage-gated channels. Each channel protomer has its own permeation pathway. The C-terminal coiled-coil domain has been shown to be necessary both for dimerization and cooperative gating in the two channel protomers. Here we report the gating cooperativity in trimeric and tetrameric Hv channels engineered by altering the hydrophobic core sequence of the coiled-coil assembly domain. Trimeric and tetrameric channels exhibited more rapid and less sigmoidal kinetics of activation of H+ permeation than dimeric channels, suggesting that some channel protomers in trimer and tetramer failed to produce gating cooperativity observed in WT dimer. Mulitimerization of trimer and tetramer channels were confirmed by protein-biochemical analyses including crystallography. These findings indicate that the voltage-gated H+ channel is optimally designed as a dimeric channel, on a solid foundation of the sequence pattern of the coiled-coil core, with efficient cooperative-gating that ensures sustained and steep voltage-dependent H+conductance in blood cells. 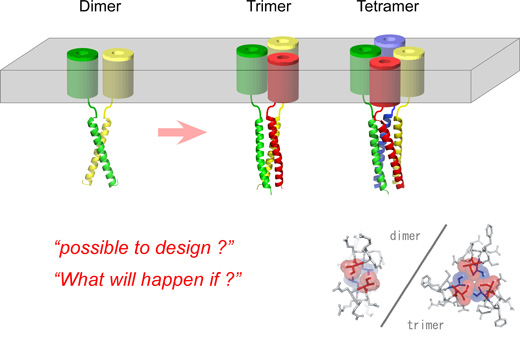