The EF-hand Ca2+-binding protein neuronal calcium sensor-1 (NCS-1) is recognized as an important regulator of neuronal functions. Although NCS-1 is also expressed in the heart, little is known about its cardiac functions. By characterizing the cardiac phenotypes of knockout (Ncs1−/−) mice, we identified 2 novel functions of NCS-1 in cardiac tissues: it is a positive regulator of contraction in the young heart and of hypertrophy in adults. In the neonatal mouse heart, the structure and function of sarcoplasmic reticulum (SR) is immature; nonetheless, it is considered a primary source of Ca2+ for contraction, suggesting the existence of missing factors that promote SR-dependent excitation-contraction (EC) coupling in the postnatal stages. We showed that NCS-1 is one such regulator that enhances Ca2+ signals in the immature heart, mainly by promotion of IP3R function, followed by CaMKII signaling, which results in a large increase in the SR Ca2+ content. In addition, NCS-1 expression increases in the early stages of hypertrophy in the adult heart and promotes progression of hypertrophy, at least in part, through IP3R activation. Our results reveal a previously unrecognized mechanism of EC coupling in young heart and another regulatory mechanism for the progression of receptor stimulation-elicited cardiac hypertrophy. (Nakamura T.Y. et al. Circ. Res. 109; 512-523, 2011) 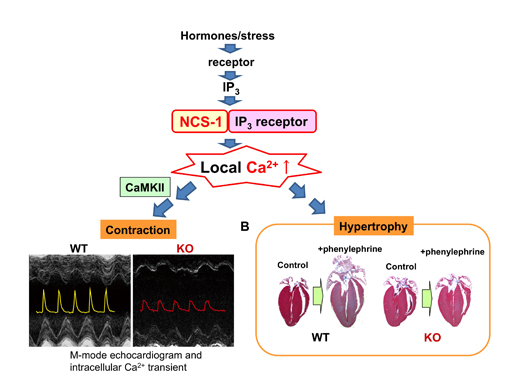 NCS-1 – IP3 receptor interaction could serve as a Ca2+ source for the activation of CaMKII, leading to a higher rate of SR Ca2+ pumping and release and inducing global Ca2+ signaling, thus promoting EC coupling in immature hearts. We found that all NCS-1, IP3 receptor and CaMKII are highly expressed in the immature hearts and thus contribution of this pathway would be large for contraction. In addition, phenylephrine-induced hypertrophy was largely attenuated in Ncs1−/− mice, suggesting that NCS-1 is also involved in hormone-induced hypertrophy possibly via IP3 receptor activation.