The precise roles for the thermo TRP channels during development have not been determined. To explore the functional importance of thermo TRP channels during neural development, the temporal expression was determined in embryonic mice.  TRPV2 expression was detected in spinal motor neurons in addition to the DRG. Furthermore, TRPV2 was localized in axon shafts and growth cones in the developing DRG and spinal motor neurons, suggesting that the channel is important for axon outgrowth regulation. Endogenous TRPV2 was activated in a membrane stretch dependent manner in developing neurons, and significantly promoted axon outgrowth.  We also confirmed by an in ovo electroporation method that TRPV2 ectopic expression promoted axon outgrowth in chick embryos. Thus, for the first time we revealed that TRPV2 is an important regulator for axon outgrowth through activation by membrane stretch during development, and is a thermo-sensor for noxious heat in postnatal animals. Shibasaki et al., J. Nueosci. 30：4601-4612, 2010 (Mar 31) 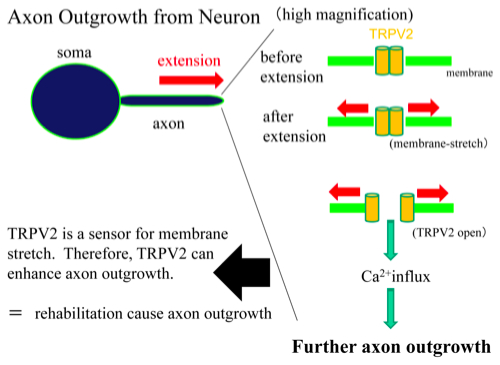 Round circle and line (navy blue) in upper left side represent a neuron. Extending axons cause membrane-stretch on their plasma membrane. Upon axon extension, TRPV2 detects the membrane-stretch, and cause calcium influx. The calcium influx causes further axon outgrowth. TRPV2 expression is restricted in spinal motor and sensory neurons during development. These two neurons extend long axons toward to peripheral tissues compared with interneurons in spinal cord. Thus, TRPV2 might be due to the long axon outgrowth in motor and sensory neurons.