Voltage-gated proton channels are characterized by high proton-selectivity and high transfer rates. They were first described in snail neurons in 1984. Since then, the mechanism of proton permeation thorough the channel has long been an issue of interest, but still remains unresolved. Temperature-dependence of the permeation process is an important feature to elucidate the permeation mechanism, but accurate evaluation has been prevented by the small single channel conductance of the order of one fA and, additionally, by proton-specific physicochemical factors which interact with each other. To overcome these limitations, we exploited a temperature-jump method which allowed changing the temperature of cells within a few ms and measuring current amplitudes immediately before and after a temperature jump. We used the current ratios to extract the permeation process successfully. Q10 exhibited a high temperature dependence, varying from 2.2 at 10°C to 1.3 at 40°C. We found that the access resistance contributed to the measured temperature dependence, which was evaluated by a novel resistivity pulse method. Finally, the Q10 for proton permeation through the voltage-gated proton channel itself was determined to range from 2.8 at 5°C to 2.2 at 45°C. The activation enthalpy for proton permeation through the pore was 64 kJ/mol. These values are much higher than those expected for water-filled pore. A few years ago, a molecular candidate of the proton channel (VSOP/Hv) was reported. The high Q10 values for permeation and the rate-limiting access resistance, revealed here, are important thermodynamic clues to advance our understanding of the permeation mechanism of proton channels. 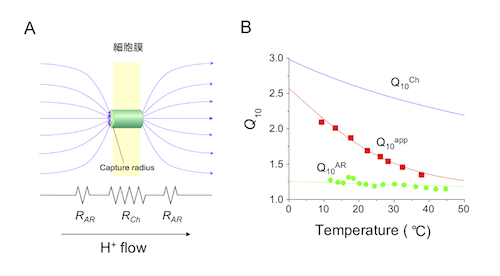