Since pioneer studies by Hubel and Wiesel in the mid 20th century, the anatomical architecture and functional compartments of the visual system in the brain have been well studied. In Old World primates and apes, visual afferents from the two eyes have segregated inputs into the granular layer (layer 4C), forming “ocular dominance columns (ODCs)” perpendicular to the pial surface. In addition, the enzymatic reactivity of cytochrome oxidase (CO) reveals a “blob” structure within ODCs in supragranular layers (layers 2-4B), which has been characterized as a non-oriented, color processing domain. Recently, we discovered that the blob structure extends to infragranular layers (layers 5/6) and that there is “border strip” structure in the vicinity of boundaries of ODCs. These compartments are revealed by the activity-dependent mRNA expression of immediate-early genes (IEGs), zif268and c-fos, after brief (1-3 h) monocular inactivation by tetrodotoxin injection. In later (> 5 h) phases, the appearance of these structures was unclear, as the IEG mRNA expression level became low throughout the silenced eye columns and high throughout the intact eye columns. These changes of IEG mRNA expression provide new insights into functional architecture of primate V1 and reveal rapid changes in neuronal activity after acute disruption of binocular vision. (Proc Natl Acad Sci USA, 2009 Jul 6 [Epub ahead of print], doi/10.1073/pnas.0905092106) 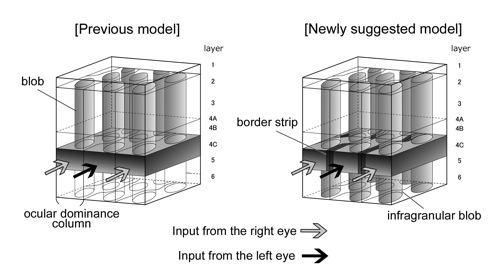 Figure caption: our schematic model of primary visual cortex of macaques. We added blobs in infragranular layers, and border strips in the vicinity of boundaries of ocular dominance columns (right) to the previous view (left).