Transient short-term memory slips out of your mind soon after the experience, while persistent long-term memory lasts for life. How do we acquire a long-term memory that preserves information of a past experience as was? Frequent activation of a synapse in general enhances transmission of the very same synapse, enabling synchronized activity of a group of neurons connected by active synapses, which is assumed to be neural substrate for memory in the brain. Thus, persistence of consistent memory is built over the persistent enhancement of transmission of the limited synapses that were active during acquisition. Modification of existing molecules in the synapse is insufficient for long-term memory which involves induction of gene expression and functions of sets of newly synthesized proteins. Therefore, proteins synthesized in the soma must function in the limited synapses that were active during acquisition among tens of thousand of synapses in a neuron. A mechanism for this is called synaptic tagging; however, any protein that behaves as the synaptic tagging hypothesis predicts was not known, and biochemical activity that serves as synaptic tagging was not specified. We observed movement of Vesl-1S, one of the proteins synthesized in the soma and required for long-term memory, from the soma to spines, small (~ 1 mm) protrusions where synapses reside, in rat hippocampal neurons. We showed that Vesl-1S exemplified the synaptic tagging hypothesis and that regulation of Vesl-1S protein transport into spines serves as a synaptic tag. Our findings will push forward researches on the molecular mechanisms and regulation of long-term memory. (Okada, Ozawa, Inokuchi. Science 324: 904-909, 2009) 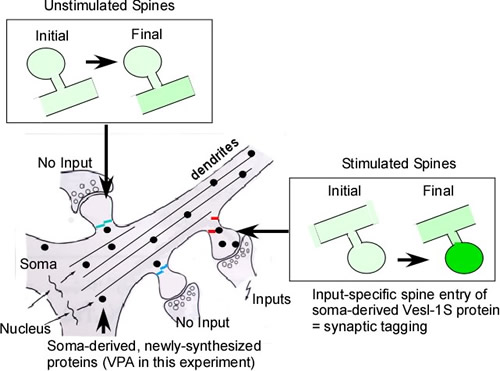 Legend to the Figure

Photo-Activatable Green Fluorescent Protein (PAGFP) does not initially fluoresce, but it does after receiving light at around 400 nm. Vesl-1S fused with PAGFP (VPA) was exogenously expressed in rat hippocampal neurons in dispersed primary culture. The soma was illuminated by a 404 nm laser, which resulted in fluorescence limited in the soma. Pharmacological stimulation was given at the distal spines to activate synaptic tag only in the synapses within the restricted area. Four hours later, VPA fluorescence originated from the soma was seen in all dendritic trees. VPA fluorescence entered spines inside the local stimulation area (lower spine), while it was not observed in spines outside the area (upper spine). The strength of the green color expresses the fluorescence intensity in the figure. An activity that permits entry of Vesl-1S proteins into spines is assumed in the spine neck. This activity is high in spines with activated synapses, thus Vesl-1S (VPA in this particular experiment) enters these spines and functions there. Regulation of this activity meets all standards for synaptic tagging, thus we concluded that this activity serves as a synaptic tag for Vesl-1S protein.