Under physiological conditions, α1-adrenoceptor (AR) stimulation modulates mammalian cardiac L-type Ca2+channel as in the case of β-AR stimulation. Our group previously reported that the effects of α1-AR stimulation on L-type Ca2+ current (ICa,L) can be classified in two opposite effects (negative and positive effects) and the positive effect is protein kinase C(PKC)- and Ca2+/calmodulin kinase II (CaMKII)-dependent (O-Uchi et al., Proc Natl Acad Sci USA, 102:9400-9405, 2005). However, two important questions remain to be solved; 1) what is the molecular mechanism which simultaneously induces two opposite effects during α1-AR stimulation?; 2) what are the molecular components for evoking the negative effect on ICa by α1-AR stimulation? In our latest paper, we show in the native cardiac cells that two different α1-AR subtypes (α1A and α1B) have functional interactions with different G-proteins and that results in opposite modulation of L-type Ca2+ channels by using the combination of electrophysiological, biochemical and morphological methods. α1A-adrenoceptor coupled with Gq and this pathway activates phospholipase C (PLC)-PKC-CaMKII signal and leads potentiation of Ca2+ current. On the other hand, α1B-adrenoceptor has the interaction with one of the pertussis toxin sensitive G-protein (Go), which β&ganma; subunits directly affect the channels and shows negative effect in Ca2+ current. The approach of characterizing the receptor subtype-specific interacting G protein will provide new insight to elucidate the whole picture of the subtype-specific signaling pathway in native cardiomyocytes, and further could lead to understand the functional roles of each α1-AR subtype under physiological and pathophysiological condition (O-Uchi et al., Circ Res. 102:1378-88, 2008). 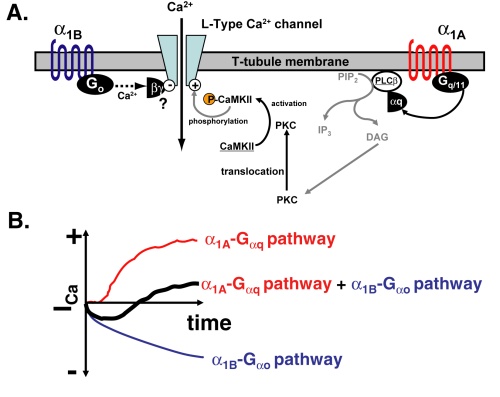