TRPA1 channel, the newest TRP channel family, is expressed in primary sensory neurons and hair cells, and it is proposed to be activated by cold stimuli, mechanical stimuli, or pungent ingredients. Recent findings have indicated that TRPA1 is also involved in inflammatory hyperalgesia and neuropathic pain. However, its role in regulating synaptic transmission has never been documented yet. In the present study, we examined whether activation of the TRPA1 channels affects synaptic transmission in substantia gelatinosa (SG) neurons of adult rat spinal cord slices by using the whole-cell patch-clamp technique. We demonstrated that TRPA1 channels are coexpressed with TRPV1 channels at the central terminals of primary afferent fibers innervated onto SG neurons. Moreover, their activation generated highly synchronized multivesicular release of glutamate through direct Ca2+entry, which results in the potentiation of excitatory synaptic transmission through the activation of not only synaptic AMPA receptors but also extrasynaptic NMDA receptors in postsynaptic SG neurons. Although endogenous substances activating TRPA1 channels are still unknown, recent findings have suggested that intracellular Ca2+ is an important endogenous ligand of TRPA1 channels. Therefore, the potentiation of excitatory synaptic transmission in SG neurons by the activation of TRPA1 channels may have important implications in pathological pain sensations such as cold hyperalgesia or allodynia. (Journal of Neuroscience 27: 4443-4451, 2007) 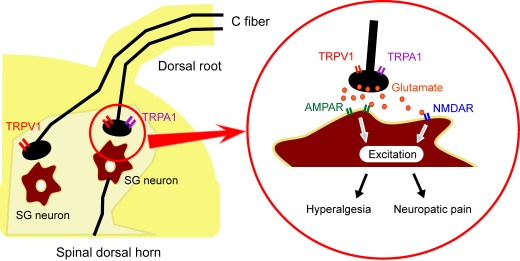