Na channels are concentrated in the axon to generate action potentials. However, little is known about how the distribution of Na+ channels contributes to the neuronal activity and function. In avian nucleus laminaris (NL), neurons act as coincidence detectors for sound source localization, and are tuned to both characteristic frequency (CF) and interaural time difference (ITD) of sounds. We found that NL neurons have distinct distribution of Na+ channels along the axon and optimize the ITD sensitivity depending on their CF. Neurons of high CF (higher than 1 kHz) had small action potentials, and clustered Na+ channels in the axon at some distance from the soma (20-50 µm, Fig.A). In contrast, neurons of low CF generated large overshooting spikes, and Na+ channels were clustered near the soma (5 µm, Fig.B). These indicate that NL neurons had a spike generator in the axon, at a greater distance from the soma with an increase of CF (Fig.C). Computer simulation showed that the distant spike initiation site improved the ITD sensitivity in high-CF neurons because of electrical isolation of the site from the soma and dendrites, and reduction of Na+channel inactivation by attenuating the temporal summation of synaptic potentials through the low-pass filtering along the axon. Thus, the distribution of Na+ channels ensures the accurate coincidence detection across frequencies. 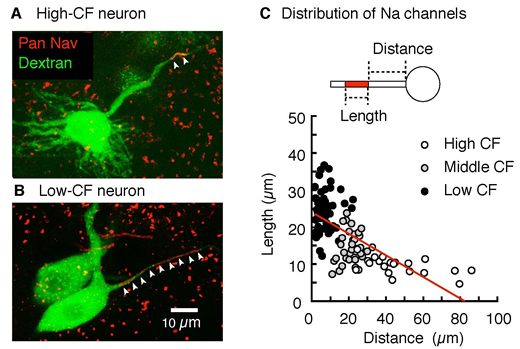