During the process of cell shape changes, proliferation, migration or apoptosis, cell volume is neatly regulated. Cell volume regulation is accomplished by regulating the net influx or outflux of water and solutes across the cell membrane. The volume-sensitive outwardly rectifying (VSOR) anion channel is a major regulator of anion transport during the regulation and expressed in almost all types of animal cells. We previously demonstrated that the VSOR channels in cultured mouse cortical astrocytes are activated by an inflammatory mediator bradykinin, and that the channels may also serve as a pathway for glutamate release, sending signals to adjacent neurons (Liu et al., J Physiol 587(10):2197-2209, 2009). Recently, we found that this VSOR channel activation is regulated in the immediate vicinity of individual Ca2+ channels causing intracellular Ca2+ rises (Akita & Okada, J Physiol589(16):3909-3927, 2011).
Bradykinin induced the opening of IP3-receptor Ca2+ channels on ER Ca2+ stores and then store- or receptor-operated Ca2+ channels in the plasma membrane. In the very high Ca2+ concentration regions created within ~20 nm of these Ca2+ channels, so-called ‘Ca2+ nanodomains’, Ca2+-dependent PKCa and b were found to be activated, and these PKCs were involved in VSOR channel activation through inducing generation of reactive oxygen species (ROS) by NADPH oxidases (NOX). This mechanism would provide a firm basis for local control of cell volume regulation and intercellular communications, even when only a small number of Ca2+ channels in a part of the cell are opened by a minute amount of bradykinin. 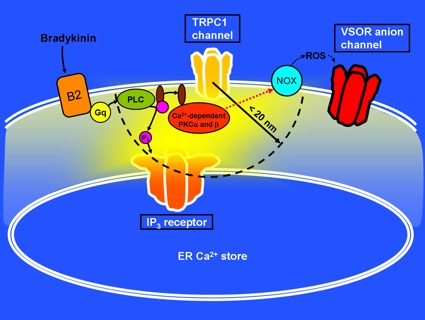 Figure legend: Bradykinin induces generation of inositol 1,4,5-trisphosphate (IP3) in the cytoplasm through binding to the bradykinin B2 receptors and activation of Gq proteins and phospholipase C (PLC). This causes the opening of IP3-receptor Ca2+channels on ER Ca2+ stores and several types of store- or receptor-operated Ca2+channel in the cell membrane. Within 20 nm of these Ca2+ channels, especially IP3receptors and TRPC1 channels, Ca2+-dependent PKCa and b are activated. The PKCs subsequently activate NOX which generates ROS for VSOR channel activation.